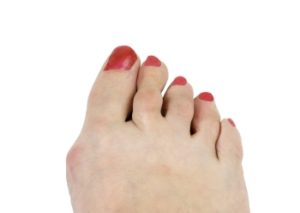 Podiatry specialists strongly recommend that people with hammertoes in the Chicago area seek treatment before the condition gets worse. When the signs and symptoms first appear,
hammertoes are more easily treated.

As time passes, the condition becomes worse and might require surgery. Podiatrists most often diagnose hammertoes in patients who wear very confining footwear. A narrow toe box that causes the toes to become compressed together will prevent the digits from lying flat. Over time, the toes may be inclined to stay abnormally positioned, even when the patient isn’t wearing shoes.

Other reasons why some people get hammertoes include the unusual tightness of ligaments or tendons in the area, and an abnormally high foot arch. Podiatrists can create custom orthotics to address foot abnormalities. It’s also possible for hammertoes to develop because of arthritis, a previous, traumatic toe injury, peripheral nerve damage, and a bunion of the big toe, which can exert pressure on the other four toes.

One common reason people consult a podiatrist is to seek treatment for hammertoes. Hammertoes can cause foot pain and make walking difficult, and in…

Take a Step Toward Comfort

Back to the top